(September 11, 2019) Christian de Mesones is new to us,
but not to making great music. The native New Yorker and
DC transplant made his first big splash at the 2006 Capital
Jazz Fest with his band Groove Skool, and he has been
funking it up for audiences regularly ever since.
In January, Christian will be releasing his new album They
Call Me Big New York in January, but in the meantime he is
getting play around the world for his upbeat single, “Throb.”
Opening with a touch of rock, it quickly moves through some
eclectic jazz sounds before settling into a horn-filled funky
number that is intoxicating.
We’re enjoying “Throb” and are looking forward to hearing
the full album. Check it out below and welcome Christian to
SoulTracks!
Christian de Mesones 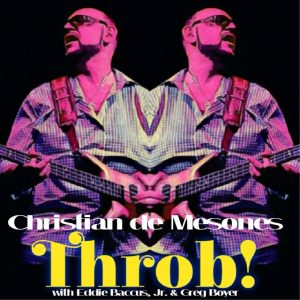