:
“Dani Wilde wraps her soulful and downright beautiful voice around this blues acoustic number, packing a lot of fire just beneath the surface that leads to her throaty growl and enviable vocal range. A song about female empowerment, her toneful guitar simmers alongside Will Wilde’s stirring harp.” — Rock And Blues Muse

Aug 24, 2019
The Wildes
Wokingham Music Festival
The Blues Siblings, Dani and Will Wilde, Live and Acoustic at this great Festival

A day packed full of fantastic musical talent in aid of raising funds for a new home for Kale. I’m proud to be performing at this small festival to help raise funds for a new home for Kale, a 14 year old boy who after suffering a bleed from an unexpected brain tumour, now needs a new wheelchair adapted home. The family home cannot be adapted, which is devastating for him and mum Jane. Please do come along for some amazing music of all genres, and to show your support!

Doors are 2pm. I’ll be onstage performing an acoustic set for an hour from 4:45pm. Tickets £10/£8 concessions not including booking fee. (Children under 10 go free!)

There will also be Pizza!

Oct 05, 2019
Dani Wilde performs with her band at this beautiful theatre
Teatro Colón in A Coruña

Hello all, Just wanted to let you know my new album “Live at Brighton Road” is available to pre-order now. It’s officially released on VizzTone Label Group on June 16th! I’m so pleased with this record – it’s my first self-produced album. It features some wonderfully talented musicians and every song was recorded live in the studio… no overdubs… I wanted to capture something real!

Half of the album is electric and the other half acoustic to showcase ‘The two sides of Dani Wilde’. It’s available to download (if you pre-order the album for download you get one free track now!) There will also be a special edition CD/DVD box-set (The whole session was beautifully filmed by the talented Philip James) and a 180grm heavy-weight vinyl release too!

Such an honour to be a VizzTone artist. Since Richard Rosenblatt launched Susan Tedeschi’s career I’ve longed to work with him, and as for being in the company of Steady Rollin’ Bob Margolin, well, I’m blessed

🙂 Thanks for having me!

“British Blues Award winner Dani Wilde burst onto the International blues scene in 2007, opening for Jools Holland at The Royal Albert Hall and signing to prestigious blues record label Ruf Records. Since then she has toured extensively across the UK, Europe, America, Canada, and Africa. USA concerts have included headline shows under her own name, and performances with girl group ‘Girls With Guitars’ alongside Samantha Fish and Cassie Taylor. The group’s 2012 record, produced by Mike Zito in Berlin, was a hit in Europe; the single “Bitch” reaching the Number 1 spot in the iTunes blues charts in Italy.

Live at Brighton Road finds Dani Wilde performing live in the studio with her touring band, featuring her brother Will Wilde on harmonica. Dani is performing mostly original songs, split into an acoustic and electric set. For her fans this will be a long-anticipated treat, for newcomers it will serve as a beautiful introduction to the depth of spellbinding talent and impact of this young British Blues Lady.” Blues Magazine, NL 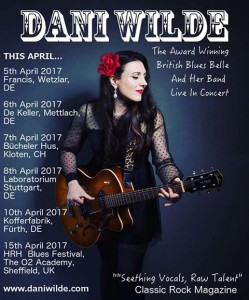 Some exciting tour-dates coming up. We’ll also be playing a Prison gig (Johnny Cash/BB King style) and possibly will squeeze in a show in Luxembourg this September:

I was awarded Best British Female Vocalist at the 2015 British Blues Awards. My songs have charted at Number 1 positions in the I-Tunes Blues Charts and in the Top 40 Country Music charts. I have a tour of Europe in April – Please see dates below. I also have a new single released entitled ‘Change’. This is from my record ‘Songs about you’. 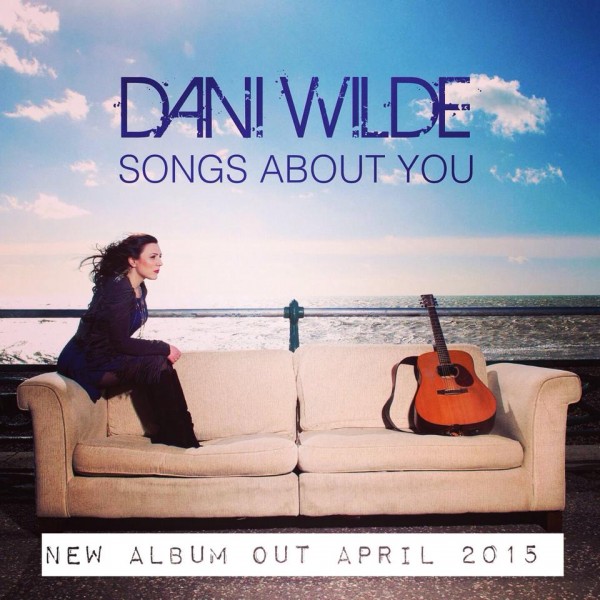 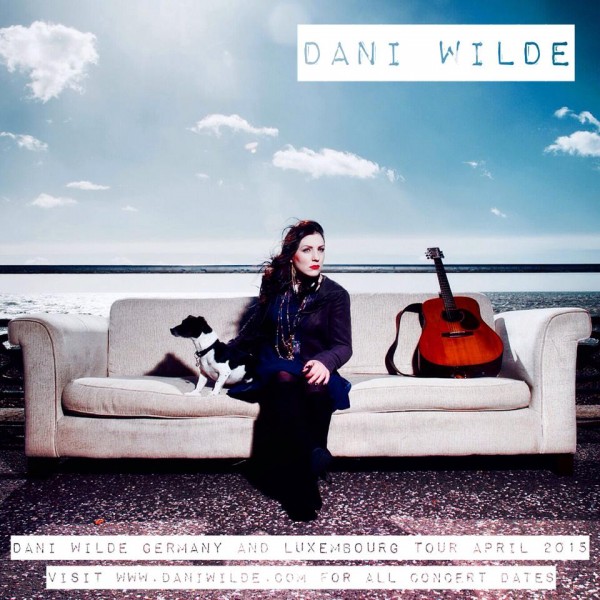