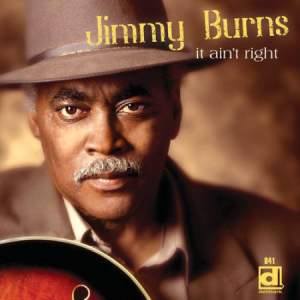 Like all great blues players, Jimmy Burns has a pretty cool life story, and one that makes his musical approach unique. This Chicago-based musician was born in Mississippi during World War II and was raised on a cotton plantation where he learned how to play guitar. He grew up around Delta blues until his family moved to the Windy City in the mid-1950s. By 1960 he was recording and playing out, and he toured the country until he slowed down his music career in the early 1970s to raise a family and run his barbecue business.

Jimmy got back into the swing of things in the 90s, and began a long-running gig at the Smokedaddy Club in Chicago. Delmark’s Bob Koester found him there and set him up to record his 1996 debut on the label, Leaving Here Walking. This led to an international tour and a new record every three or four years, all of which are very good.

It Ain’t Right is Burns’ latest Delmark Records release, and it was recorded over a few days last February at the Riverside Studio in Chicago. Jimmy took on the vocals, guitar, and harp, and he was joined by his usual crew of Anthony Palmer on guitar, Greg McDaniel on bass, and Bryant “T” Parker on drums and backing vocals. Also along for the ride were Sumito “Ariyo” Ariyoshi on piano (from Billy Branch’s band), the super talented Roosevelt “Mad Hatter” Purifoy on organ, and a killer horn section of Marques Carroll, Chris Neal, and Aaron Getsug. Bringing all of this together was producer Dick Shurman, who you may know from his work with Albert Collins, Magic Slim, Otis Rush and Johnny Winter.

The first two tracks on the disc are originals that were written by Billy Flynn, a superb guitarist and esteemed member of the Chicago blues community. As you would expect, these tunes make the most of Burns’ guitar skills, but they also work great with Jimmy’s rich voice and his more than capable band. “Big Money Problem” has a cool bounce with melodic and bluesy guitar lines and great opportunities for Ariyoshi to work his piano magic. The other song is a nice rhythm and blues ballad, and “Will I Ever Find Somebody?” features Jimmy’s soulful voice along with a very tasteful horn arrangement and Purifoy setting the mood on the organ.

After this, the remainder of the album is an assortment of blues, rhythm and blues, and soul covers, and Burns worked his personality into all of them so that they form a very nice collection of classic American music. It should also be noted that this is a very well produced project with great balance and a very warm sound – Shurman has done his magic once again.

There are a couple of Percy Mayfield songs in the mix, and they have been reworked quite a bit. “Long As You’re Mine” may be the most energetic version you have ever heard, as it goes full-bore R&B with the horns leading the way. And “My Heart is Hanging Heavy” goes the funky soul route, with the fantastic backline presence of McDaniel and Parker and some powerful guitar playing from Burns. There is not enough space to write about all of these songs, but you will surely find one of your favorite artists in the mix somewhere, as there are tunes from Jimmy Reed, Little Walter, Junior Wells, and Goree Carter. He even included Ben E. King’s “Stand By Me” which has been covered a lot, but Jimmy gave it a super clean uptempo Latin feel which may sound odd on paper, but it works and ends up being a truly unique offering.

A standout track from It Ain’t Right is the straight-up blues song, “Hard Hearted Woman,” which was originally done by Jimmy’s older brother, the late Eddie “Guitar” Burns. The younger Burns’ guitar touch is wonderful and this tune is a touching tribute to a great Detroit bluesman, not to mention a really tasty serving of blues music. A close runner-up is the final track, “Wade in the Water” and this traditional song combines the Mad Hatter’s organ and a collection of lovely vocal harmonies to create a gospel tune that will put a smile on the face of any sinful soul.

Jimmy Burns does not cut a new album very often, but when he does it is perfect and It Ain’t Right is no exception. Jimmy and his band covered a lot of musical ground on this release, and along the way they took a lot of music you are already familiar with and presented it in their own voice. Give the album a listen and see what you think, and if you are in the Chicago area, be sure to check out Burns’ website to see if he has any shows scheduled, it will definitely be worth your time!

Reviewer Rex Bartholomew is a Los Angeles-based writer and musician; his blog can be found at rexbass.blogspot.com.