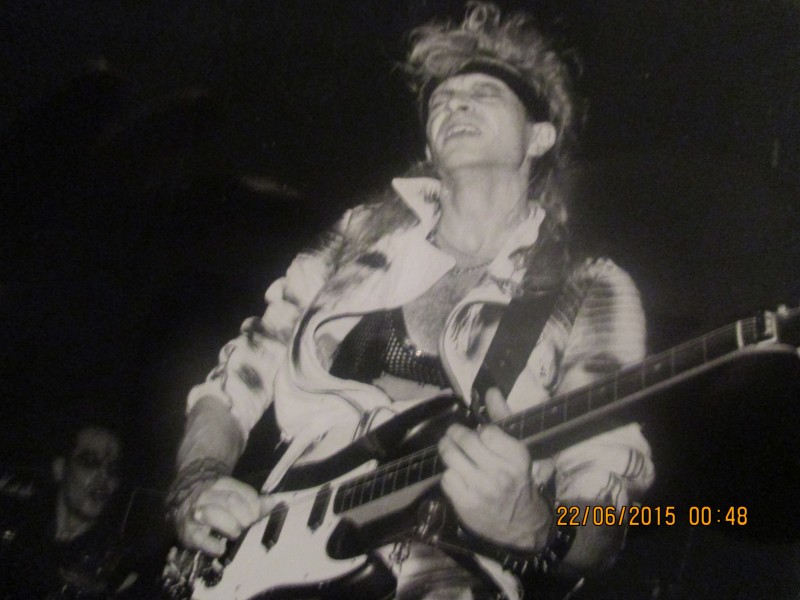 “Rogue Male is the encapsulation of every ideal that came with punk taken a few years on.  It’s my statement declaring a total commitment in life-style and attitude.”  – Jim Lyttle
Jim decided to put together a band that would mix punk aggression with a rock/metal style, it was ground breaking and original making them one of the first crossover punk/metal bands that later became part of the NWOBHM.  After a series of line-ups, a stable touring band was produced;  Jim Lyttle (guitar/vocals), John Fraser-Binnie (guitar), Kevin Collier (bass) and Steve Kingsley (drums) who was later replaced by Danny Fury.  This line-ups’ live performances gained the attention of several record companies, and the band secured a deal with the metal label Music For Nations and Elektra USA.
The first Rogue Male album, First Visit, which was written and arranged by Jim Lyttle, was released.  The album was critically acclaimed in the worldwide rock/metal journals and Rogue Male toured the UK/Europe and the USA extensively in support of it.  It received “Album of the Month” status worldwide and the band won an award for “Top International New Artist”.  The band appeared on several television and radio broadcasts in the UK, Europe and USA.  The second album Animal Man, also written/arranged by Jim Lyttle, was released and again received ‘Album of the Month” status worldwide in all the top rock/metal journals.
Rogue Male, reported to be the thinking man’s metal and the most excitingly dangerous band since The Sex Pistols, were credited as being ‘the next big thing’, and indeed they were, they never received a bad review for live or recorded work.  Worldwide rock press adored them and live audiences worshipped them, word was they were hotter than hell.
“Until you’ve seen this band live you haven’t lived.”  (Sounds Magazine)
In 2007, both Rogue Male albums were re-released by an independent record label Metal Mind Productions, Poland and have again received worldwide recognition.  After much coaxing from his friends and fans who have remained steadfast over the years, Jim decided to put together a new album, for Jim it’s only ever been about the music and the fans.  It is for this reason the album titled ‘Nail It’ was recorded at Barnroom Studios, Kent with Bernie Tormé (guitar/keyboards), John McCoy (bass), Robin Guy (drums) with Jim on guitar/vocals.  All songs were written/arranged and produced by Jim Lyttle and is now available through his own label RM2K Music at www.roguemale.rocks and other usual outlets.
Rogue Male recently released a dvd song titled ‘Liar’ for free download, as a precursor to their next album.
In 2010 Jim Lyttle and Johnny Fraser-Binnie got back together, the line-up now includes Tony Forsythe (bass) and Mauricio Chamucero (drums).
“YOU CAN RUN, BUT YOU CAN’T HIDE”