We are thrilled to Rock the awesome Riverside Aarburg Festival in Switzerland on August 29, 2020 🇨🇭
It will be a blast 🔥🔥🔥
Get your Tickets 👇
www.riversideaarburg.com

The Hollywood Vampires VIP packages will be available beginning Tuesday, March 5. VIP packages may include a meet & greet, photo with the band, a premium seat, and exclusive merchandise. Regular tickets go on sale on Friday, March 8 at 10AM local time. For more information, go here.

The press release once again details how the group was formed:

In 1969, on the Sunset Strip at the legendary club, The Rainbow Bar & Grill, The Hollywood Vampires were born in the upstairs bar. It was a gathering place for the rock stars living in or passing through L.A. “To join the club, one simply had to out drink all of the members,” says Alice Cooper, a founding member of the original Vampires.

Cooper and good friend Johnny Depp got together and decided the spirit of The Hollywood Vampires should live again — minus the drinking. Cooper and Depp were joined by Joe Perry, who is an old friend of both, and the recording began: a tribute to the original Hollywood Vampires. An environment was born for great artists to hang, laugh, and play together. 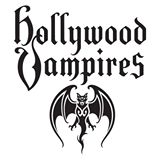