It just seems we cannot talk enough about our friend and hero IB Sam. My older brother Paul was living in NOLA in 1978 and he always told me about IB Sam in his hot air balloon floating over Jackson Square for all the hippies. This event is legendary. When asking Sam about this, he told us how challenging it was for him. At that time, he was investing all his savings into his inventions and stunts. The cost of the balloon rental, buying the 300 feet of electric cord: he put everything he had into it. The day of the show, eye witnesses all agree that Sam did get the balloon up in the air and it was the most spectacular concert they had ever seen. According to Sam, he was very dismayed as the wind blew up and he could not go as high as the cord he bought as the balloon operator was concerned.

Tom Ciaburri was in NOLA this week doing research for his film on Sam and found this poster at the NOLA Jazz & Heritage Foundation Archives. Sam is performing at the next NOLA Jazz and Heritage Festival and they have asked Sam to consider a stunt for this show.

We are all excited to hear what his ideas are. His first was to parachute into the festival, but that idea has been rejected. 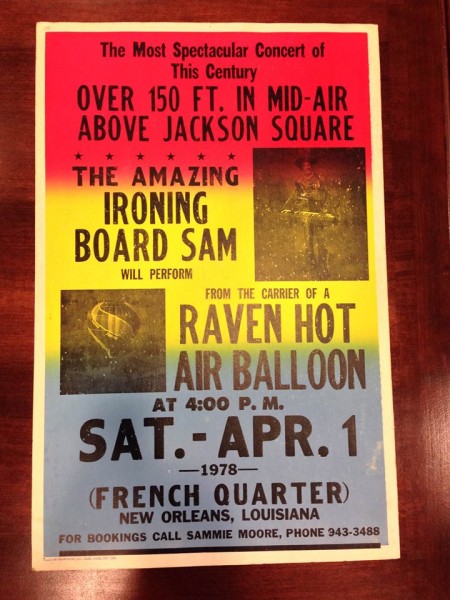