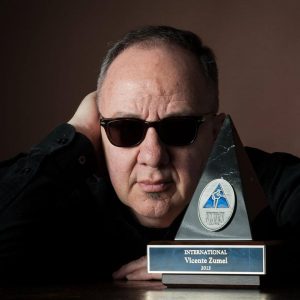 If you like blues or you are a woman, and you love American music, then this book cannot be missed and deserves a place in your book library.

It is a tribute and homage to all women who, with their musical art, contribute to spread African-American music

Some of the women who are mentioned in the book pages are well known, some other ones are less known, but they all love what they play and give the best of themselves to perform and sing the blues and American music with passion and commitment.

Here comes a book totally devoted to the great work that 365 women have done and do in blues music.

You can order it asking directly to the publisher at https://www.lenoir.es/blues/2958-blueseras-rockeras-souleras.html

You can read 3 quotes specially written for the back cover:

“This reference should be on the bookshelf of any serious blues aficionado. While 2013 Keeping the Blues Alive Award recipient Vicente Zúmel has now penned thousands of blues album reviews in total, these reviews of recordings by modern blues women will give blues lovers another reason to listen to that CD from your collection or else purchase it anew. Kudo’s to Vicente Zúmel for recognizing the value of the women of the blues with a special book of reviews that casts a light on their unique contributions to the genre.”

Barbara Newman, President and CEO of The Blues Foundation.

“With his book, Vicente Zúmel has given us a deeper look into the musical stylings of some of the finest female singers. Through his reviews of their respective recordings, we are offered a critical insight into the unique individual styles of these dynamic female artists”

“The first book from the man known worldwide as Spain’s premier blues radio programmer and one of Europe’s most respected blues journalists. A treasure trove for anyone interested in today’s blues”.