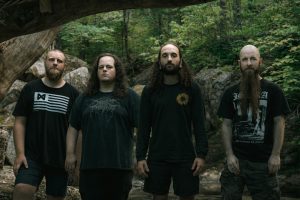 Ancient Thrones, formerly Abysseral Throne, have a new concept album “The Veil” coming out this year and are teasing fans with the first single “The Soul To Flesh”.

More than just a headbanging metal record, “The Veil” ushers in their new image and shows fans their evolution with the first release under the new name. Current fans will be pleasantly surprised and new fans will be intrigued by the familiar melodic material and the upcoming technical and progressive approaches.

Initially very thrashy, the writing for “The Veil” progressed from there into a concept record that intentionally has a beginning, middle, climax, and end with a very cinematic result. Ancient Thrones shares the concept:

“The Veil is a 57-minute descent into purgatory. The record subtly follows the 5 stages of grief and the choices we make haunting us into eventual acceptance. It’s about what’s important in life and all we leave behind when we indulge in selfish values. Musically it is a dark passage that digs deeper and becomes more painful as our character discovers more about their past. It’s a concept record broken up into two parts, beginning with a childlike naive perspective in denial and ending with a bittersweet and orchestrated finale into acceptance.”

The single “The Soul to Flesh” is the fourth track on the album and tells about the character entering the third stage of grief. This song kicks you in the teeth pretty well out of the gate and ups the frantic pace of the album to a new level. It is just a sliver of what you can expect from the Ancient Thrones forthcoming album.

Recommended for fans of Revocation, Skeletonwitch, and The Red Chord, the unexpected blackened death on “The Veil” is ready for Halloween, coming out on November 6th, 2020.

The single “The Soul to Flesh” can be heard at the following links:
YouTube
Bandcamp
Spotify

Formed in 2011, they quickly went to work to establish themselves among their scene and gained local notoriety eventually allowing them the opportunities to open for renowned metal acts from across the globe.

Sean Hickey (drums/vocals) is the sole original founder of Abysseral remaining, Matt LeBlanc joined in 2015 on bass and improved and refined the sound and operation drastically. Once they lost their original singer and guitar player Jonny Rains, Dylan Wallace joined and took over main songwriting duties. Hickey took over completely on vocals with a black/death metal vocal style, and Nick Leslie joined shortly after on the second guitar. Work began on writing a new album which took about 3 months to write the music for. The new material sparked the name change to Ancient Thrones as an homage to one of Hickey’s favorite bands and inspirations, Wolves in the Throne Room.

In 2013 the band released its debut record and its subsequent follow-up in 2016, “Storming The Black Gate”, which was nominated for an East Coast Music Award. Ancient Thrones have toured throughout Canada, and played at several festivals, sharing the stages with bands such as Silverstein, The Agonist, Black Crown Initiate, and Skull Fist.

2020 sees the release of the concept album “The Veil” showcasing the band’s desire for storytelling and pushing them to new heights musically. The new album explores the journey of a man faced with tragedy, his mortality and ultimately the permanence of our actions told through technical soundscapes and haunting atmosphere.

“one of the most promising young bands in the region (Atlantic Canada) right now […] I already can’t wait for the next one. 4/5 stars” – Mettalworx Music Group

“Equally impressive is that no track feels as if it’s been bled of its passion and drive during the writing process; a genuine love of metal in all its forms shines through on each track, making the EP a wonderfully enjoyable 26 minutes.” – The Sound Not The Word (Review 2016 – Storming the Black Gate EP)

“This is some world-class metal, folks, get it, listen to it, and enjoy. And, as a side-note, ‘Storming the Black Gate’ easily stands out as one of the strongest New Brunswick metal releases of all time. Snatch up one of the physical copies before they sell out and the band is signed to Metal Blade or somebody who will do a mass-produced re-release Or find them on Bandcamp.” (Review 2016 – Storming the Black Gate EP)