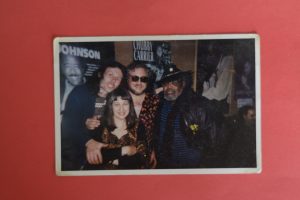 Can’t wait to play Blues with Tota Blues Band and Jose Luis Pardo. I’ll play for the soulful Spanish audiences and enjoy the beautiful countryside and great company on the rides in between. I’ll send you many photos. I’m inviting YOU to enjoy my tour with me.

Bob Margolin is going to Spain!! Check it out!!

I am very much looking forward to this! I would suggest getting your tickets in advance…

🎶 Blues legend Bob Margolin and up and coming blues guitarist David Julia both have new and exciting music on the way! Join us as we celebrate the occasion at their double-header CD release party at The Funky Biscuit!
Reserve now!

I am honored to play with so many great musicians on this amazing New York City show which benefits The Blues Foundation. I’ll play my best Blues — for all of us! And Thank You Jimmy Vivino for inviting me. 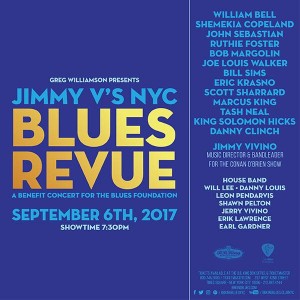 My music audience enjoys my onstage stories and what I have been writing for 25 years in music magazines. They tell me “You should write a book!” Well, I have, it’s an ebook published in 2011 and many of you have let me know you enjoy it. It’s called “Steady Rollin’ and available to download on Apple iBooks and Amazon Kindle. Here is a preview of one of the stories:

If you put me onstage against your favorite guitarist, who would win? Not me, because I don’t consider playing music on a guitar to be competitive. What do you think?

In the summer of 2007, a computer game called “Guitar Hero” sponsored a small Blues festival. I’d never heard of the game but was told it simulated the experience of playing guitar onstage. Sounds like fun, but I’m not interested in checking it out any more than a professional jockey wants to ride the horsies on a merry-go-round. The game has grown wildly in popularity in a year. (2011 update — already gone) That’s fine but let’s consider another way to do something good with a guitar.

I did a nightclub show recently with Hubert Sumlin, no bass and drums. Knowing we would have a special guest sit in that night, we had three electric guitar amplifiers lined up next to each other and a chair in front of each one. I sat in the middle and Hubert sat to my left. When Ronnie Earl sat in, he was to my right. It seemed like a heroic opportunity to me.

There was no reason to play loudly, even though we had electric guitars and amps which could. We jammed on songs from our histories. Hubert and I featured both our own songs and revisited ones we had played with our former employers, Muddy Waters for me, and both Muddy and Howlin’ Wolf for Hubert. Ronnie Earl is a beloved friend to both of us. Since the late ‘70s he has earned a still-growing reputation as one of the greatest and most influential Blues guitarists. Our editor tells me that many readers love Ronnie too. Good, you should.

One of us would start a Blues song, either one we all knew by title or a jam started by saying something like “slow Blues in A.” We didn’t rehearse or discuss what we’d play before we hit the stage. We didn’t choose parts as the songs began. We just started playing, always listening to each other, and each would find a part that would enhance the moment. We opened our ears and hearts to inspiration from the Blues music we love and from what we played together, reacting at least instantly, sometimes feeling what was going to happen before it did.

There were moments when two of us might start to play the same thing at the same time, but that would bring a smile, as when two friends start to say the same thing together. Then one would instantly change what he was playing to something harmoniously and rhythmically complementary. The audience listened closely and were passengers on our musical voyage that night. I’m still smiling weeks later. That’s all the “guitar hero” I ever need.

But it was no game and more important, there wasn’t any competition or scorekeeping. It was total musical and spiritual collaboration. We brought all of our own life experiences to that jam. We conquered time too when we could bring forth a little of what our departed musical ancestors and mentors had taught us. I think that’s more heroic than being a “guitar slinger,” a term that comes from the cowboy movie word “gun slinger.” In this trio nobody got shot down, nobody kicked anyone’s ass. It would have been ugly, immature, and disappointing if any of us had tried to out-flash the others rather than play well together.

For me, this was an approach I learned in the Muddy Waters’ band in the 1970s. The deepest musical thrill I ever had occurred most nights over seven years on Muddy’s bandstand: playing his Blues with him. The template for my job, as I saw it, was designed twenty-five years before that, around the time I was born, by the second guitar player in Muddy’s band, the late Jimmy Rogers. By “second guitar” I don’t mean Jimmy was the second guitarist to play with Muddy, I mean that he conspired and collaborated with Muddy to play guitar parts that enhanced and completed each other. The early ‘50s Muddy Waters band, which also featured harmonica icon Little Walter, is considered by many deep Blues lovers to be their all-time favorite band. I deliberately avoid the word “best” — as Muddy said: “Ain’t no best, all you can do is be one of the good ‘uns.”

Jimmy Rogers told me that sometimes after a gig in the old days, he and Muddy and Little Water would ride around and talk about how to put their musical parts together, arrange their songs for maximum impact. They didn’t try to upstage each other but worked together for their band, which was always in the service of Muddy’s singing. There was competition involved, but only with other bands. To survive they had to stay in the big leagues with their peers, legends like Wolf, Elmore, Jimmy Reed, B.B. King, Ray Charles, and the very powerful new generation of Blues players who lit their own fires.

By the time I got into Muddy’s band, nearer to the end of Muddy’s career, his band still listened to each other and worked together on the bandstand, but Muddy and the band never talked about music. I’m told that Muddy’s longtime piano player Otis Spann used to rehearse with new band members and teach them how to understand and function as part of Muddy’s sound. When Otis left Muddy’s band in 1969 and died shortly after, nobody took over that role. By the time I got there in 1973, I was expected to learn onstage, like learning how to swim by being thrown into the deep end of a pool. I was very determined to learn what I didn’t know and not sink. Looking back, I must thank Muddy again for not giving up on me, and for deliberately if sometimes grudgingly teaching me. I also thank the rest of his band for their patience and friendship, and when we play together now, I try to thank them on the bandstand by using what I learned from them and Muddy to play our best Blues together. Whatever I may have accomplished in the last thirty-five years and thousands of gigs, I’m still the kid in that crew.

Besides the modern game concept of “guitar hero,” there is an older term that also does not apply to the kind of musical collaboration I’ve been describing: the function of “lead” guitar and “rhythm” guitar. I first read about that in the credits on early Beatles albums, before I started playing. George played lead guitar and John played rhythm. That meant that George played the solos and the fills, while John strummed chords. But in Muddy’s band, and in the jam with Ronnie and Hubert, there was nobody playing only lead or rhythm guitar. The parts we chose danced between backing up and standing out, sometimes supporting, sometimes exploding with feeling. The concept of playing lead or rhythm is pedestrian compared to that.

There are many Blues musicians today who are well-known, acclaimed, and respected but would not share my opinions and preferences. Sidemen may have been hired by a bandleader to provide backing in a very specific way, nothing more. A bandleader may choose to be “the artist,” not to collaborate. There’s no absolute right or wrong way to approach making music. Some of the best is made with specific and rehearsed arrangements and parts but after experiencing the conspiracy theory I really enjoy that for myself.
Five weeks before my jam with Ronnie and Hubert, I had a similar thrill which was not strictly Blues-oriented, but featured magical guitar collaboration. I had been teaching workshops at Jorma Kaukonen’s Fur Peace Ranch in Ohio, and the concert at Fur Peace Station that weekend presented me and legendary guitarists Jorma, G.E. Smith, and Larry Coryell. We all performed separately and in duos, but on the encore, we all played together with bass and drums too. Our encores were a couple of one-chord jams which went to places in the soul that everyone can feel, as well as some places that I’d never been to before. These amazing guitar players all love Blues but are accomplished at, even masters of, other styles as well. They listened to each other, supported each other, plotted to groove and to dazzle together. The audience got it and inspired us to our best. It would have been fun if we’d been alone and jamming, but we were fueled by their enthusiasm.

Musicians, and people in general, working together can do a lot more than they can by just filling a job, or especially by competing and working against each other. That’s what “guitar hero” means to me.

I face a dilemma/blessing. While I make my own music in the Blues World, and my 2016 My Road CD is doing well, I still must honor Muddy Waters as my mentor and musical foundation. There are commercial and spiritual forces pulling me both ways, but YOU tell me: Why can’t I do both? Muddy brought me to the original Last Waltz Concert (and Scorcese film) 40 years ago. Now I’m 5 years older than Muddy was then, and celebrating The Last Waltz on Blackbird Presents’ Last Waltz 40 Tour, Jan. 21-Feb. 4. There will be another leg of the tour in March. Thank you Muddy, Warren Haynes & Don Was (musical directors), Blackbird Presents — and all of you who I’ll see on the road at these Last Waltz 40 concerts. http://lastwaltz40tour.com/

I’ve had a busy year working for my future, creating my new album My Road. The last couple of months included some insane travel too — 3 round-trips to Europe with unintended flights to and from Istanbul, and long drives with my band for CD pre-release parties. Now that’s over tll January, except for 12/26 in Hickory, NC next Friday. I found myself exhausted, but that was yesterday.

Today, I slept late, played with the pets, and then wanted to turn to The Arielle Project —…