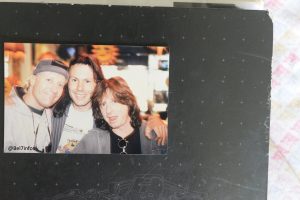 our last meeting with Gregg Bissonette and Steve Lukather

Brett Tuggle was an American musician, singer and songwriter who is best known for his keyboard playing with Fleetwood Mac and the David Lee Roth band.

As a child, he studied classical piano and learned guitar and organ in his birthplace of Denver, Colorado, United States. As a teenager, he played in local Denver bands. When he left home, he played in touring bands in Texas, where he learned a range of traditional music styles. He then returned to Colorado where he launched the band Head First. In 1979 record producer Keith Olsen invited Tuggle to go to Los Angeles to meet an artist who needed a keyboard player.[1]

In Los Angeles, Tuggle made numerous professional contacts with bandleaders, which helped to start his touring career. He spent much of 1981 as keyboardist for John Kay & Steppenwolf, before meeting Rick Springfield and joining his band in early 1982. He also played keyboards with David Lee Roth in Roth’s post-Van Halen career 1986-94 and briefly returned in 1997. In 1988, Tuggle co-wrote the top 10 hit single “Just Like Paradise” with Roth.[2] In 1992, Tuggle was invited by Mick Fleetwood to be a member of the band The Zoo. Tuggle also toured with Steve Lukather from Toto. Tuggle has played with Chris Isaak and Whitesnake.[1]

While Tuggle is known for his onstage keyboard playing for Fleetwood Mac, he is best known for his performing and songwriting as keyboard player for Roth on the 1986/1987 Eat ‘Em and Smile tour, the 1988 Skyscraper tour, the 1991 A Little Ain’t Enough tour where he also has several co-writes on that album, and up to the 1994 Your Filthy Little Mouth tour. He continued to perform on various occasions with Roth until some point in 1996/1997.

Scouting magazine’s review of Roth’s album Skyscraper, praised Tuggle’s co-writing work on what it called the “best tunes” on the album. The review calls Tuggle and Roth’s co-written song “Just Like Paradise” “…sexy, sassy, and memorable” and states that Tuggle’s keyboard playing “…give[s] the music an extra dimension and make[s] “Paradise” the bounciest cut Roth’s been involved in since “Jump”.”[3] Rick Springfield’s book Late, Late at Night, he states that with his touring band, with “Tim on guitar. Mike Siefret on bass. Brett Tuggle on keyboards”, Springfield formed a “special camaraderie” with Tuggle on the road due to their shared interest in “illicit sex” with women.[4] Tuggle was due to reunite with Roth for solo performances scheduled in 2020.