To all my musician friends: I am very excited to announce that this project is out now:

Produced and composed by Jeffrey Carruthers and Katja Rieckermann 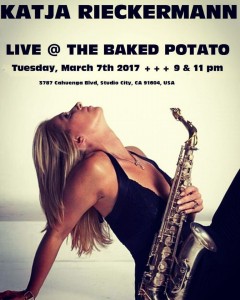 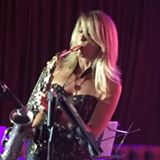 Talented, attractive and sexy, Katja Rieckermann truly is a “Horn Star.” Born and raised in Luebeck, a small town in the north of Germany, she moved to Hamburg to study music. Restless and looking for a challenge, she eventually made it to Hollywood, California, the starting point of so many successful careers.

One of Katja’s first high-profile performances was with the rock band Scorpions in 1997, followed by a guest appearance with the Canadian rock band Saga. In true Hollywood fashion, Katja was eventually cast as a regular on the hit television series “Ally McBeal” and in the feature film Star Trek “Nemesis”. With increased high profile visibility, the entertainment industry quickly took notice of Katja’s musical talent.

In 2001, Katja had the opportunity of a lifetime when she went on the Rod Stewart Human World tour 2001 and 2002. This opportunity gave her the ability to prove herself as a soloist, performing with a superstar on an international stage.

Since then, Katja has been on countless tours, concerts, TV performances, award shows and recordings with big stars like Al Green, Carol King, Brooks and Dunn, Rue Paul, Jeff Goldblum, Mary J Blidge, David Foster and Branscombe Richmont, to name a few. Katja has performed in front of musicians, VIP’s and music fans from all over the world, including the Queen of England!

In 2007 Katja released her self-titled debut CD, title “KATJA.” She also established her role as the lead saxophonist in Rod Stewart’s band.

In 2008 another big-time musician with the same last name as Rod, hired Katja to record saxophone on his Songbook, Vol 1:, Dave Stewart from the Eurythmics. This occasion was followed by a couple of live performances with his Rock Fabulous Orchestra.

In 2010, Inspired by her work with big stars, Katja completed her 2nd CD. Sandi Strmljan, an extremely talented musician, songwriter and producer, produced this progressive new project. Together, they created a new sound that combines pop, jazz, dance and electro house with a sophisticated horn section. The name of the project “Horn Star” is well earned.

In Horn Star, Katja shows off her hardcore musical talent; her sensual presence and ability to please an audience shines through in every song.

The idea for “Never Stand Still” was born in January 2014 during a lunch with producer Jeff Carruthers. The vision was to create an instrumental version of Amy Winehouse’s “Rehab”, basically 70s music inspired by artists like The Temptations, Sam Cooke and Jr. Walker and the AllStars.

Within the following 2 months Katja and Jeff ended up writing 11 tunes. “Ideas just kept coming at me” says Katja, which she then took to Jeff and he polished them.

The next step was an Indiegogo campaign to help raise funds for the making of the CD which was very successful and made it possible for Katja and Jeff to take some of LA’s best musicians to the some of the best studios in Los Angeles.

Great artists like Joe Bonamassa and Arturo Sandoval gave the honor of a guest appearance. Now, a year later, the CD is finally done and released on HornStar Records.

A highlight of her career was to perform at the 58th Grammy Awards with Lady Gaga, Nile Rogers and Raphael Saadiq doing a Tribute to David Bowie .