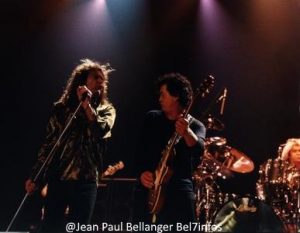 The development of Led Zeppelin’s upcoming official documentary about the formation of the band is causing rare video footage to be removed from the internet.

Footage of Led Zeppelin performing at the Laurel Pop Festival in Maryland on July 11, 1969 had been available to watch on YouTube for more than a year but has been removed because the filmmakers producing the documentary are planning to include it in Led Zeppelin’s official film.

The news that the video was deleted comes months after another rare video was removed from the internet in similar circumstances.

Footage of The Yardbirds performing with Jimmy Page at the Village Theater in New York on August 25, 1967 has also been deleted because it may be in the new documentary.

The Laurel Pop Festival footage is being considered for inclusion in the band’s official documentary, according to posts on Led Zeppelin’s official forum and the Royal Orleans site.

The video clip first emerged as part of the 2013 documentary film “Led Zeppelin Played Here” after Tim Pace mentioned that he had shot 16mm footage of Led Zeppelin on stage.

A clip of Pace’s footage of the band performing was uploaded to YouTube. But following interest from Paradise Pictures, the YouTube video has been deleted “due to a copyright claim by Paradise Pictures.”

It appears that the filmmakers are purchasing footage so that it’s only available to watch in the band’s film rather than merely licensing its use.

A similar copyright claim was made for the three minutes of colour footage of The Yardbirds performing with Page in 1967 that had been available to watch online since 2016.

Paradise Pictures is owned and run by Allison McGourty, a writer and producer of Led Zeppelin’s upcoming documentary.

McGourty told The Los Angeles Times earlier this year that her company had struggled to obtain some of the footage needed for the documentary, which is currently in post-production.

“It’s been difficult to get all the footage they need. The pandemic shuttered European archive houses for months, and now they must rush before the houses shutter again,” the newspaper reported.

LedZepNews previously reported that the documentary may be titled “Apollo” and had a runtime of two hours and 27 minutes when submitted to a film festival.

Online posts suggest the film is a mixture of black and white and colour footage, with new footage such as interviews with the surviving members of Led Zeppelin shot in 4K on Arri Alexa cameras.

Led Zeppelin – For Your Life