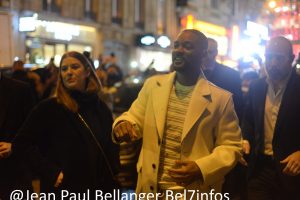 Before taking the stage to receive his Oscar, Smith embraced Pinkett Smith. He also mentioned during his speech that fellow lead actor nominee Denzel Washington told him “a few minutes ago … ‘At your highest moment, be careful. That’s when the devil comes for you.’”
Will Smith slapped Chris Rock at the Academy Awards Sunday after the comedian made a joke about Jada Pinkett Smith while presenting the award for documentary feature.
“Will Smith just smacked the s— out of me,” a stunned Rock said after Smith rose from his seat to strike him.
“Keep my wife’s name out your f— mouth!” Smith shouted at Rock after returning to the audience, which was bleeped during the broadcast in the U.S.
“Wow, dude,” Rock said. “It was a ‘G.I. Jane’ joke.”
“Keep my wife’s name out your f— mouth,” Smith repeated.