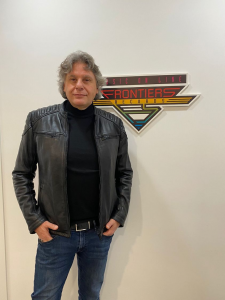 especially, we have managed to create an amazing team of superb writers who can work and pen songs in so many different music styles. We represent now more than 250 writers in every continent and we are proud to give them the chance to present their amazing output to the worldwide markets with great artists who perform and present their songs. This also prompts me to mention and thank all the great producers we have worked, developed and launched from (of course!) the ubiquitous Alessandro Del Vecchio to

, Michael Palace, and more new guys to come to your attention VERY soon!

Frontiers is also a label that has invested directly in live music during our history. Together with Now & Then, we worked and supported the GODS festivals from 1998 until 2003, we – then – had three editions of the United Forces of Rock in Germany together with AOR Heaven and Escape Music, and finally we launched the Frontiers Rock Festival, done OUR OWN WAY in Milan! We had six amazing editions and brought in to play some of the most exciting international attractions, new bands, and projects we put together. It was met with a fabulous response from the fans who came from everywhere (South and North America, Japan, Russia, Korea… Even Mauritius island!) who have been asking for more. We had to take a little pause, but we hope to be back soon, stronger than ever!
During this pandemic, I asked many bands to deliver live in-studio performances so that fans could see them performing their beloved songs in a live (as close as we can get these days) environment, notwithstanding the problems that everyone is facing for such get togethers. Perfect Plan, Bloody Heels, and Smackbound have already posted their performances on our YouTube channel and you will see more coming soon, depending on how the pandemic will allow the bands to gather and play. I hope you will enjoy their performances and take the opportunity to check out some new bands, if you like.
Time as always to thank my loving family: my wife Maria who supported my brave vision in 1996, when I left my job for a challenge that as of now I feel we both won. My father Fernando, my mentor, my soul, my heart, my everything, I hope you are proud of me, I love you eternally. My kids Eleonora and Fernando, who I am so proud of and that come every day to the office and give their contributions to Frontiers.
Massive thanks also to Mario, Elio, Nick, Lorenzo, Giulio, Ezio, and Francesco. Heartfelt thanks to our amazing advisors Dario De Cicco, Piero Di Nono, and our computer guru Ezio Festa. A winning team that does not change and continues to kick asses year after year!
Thanks to the one who helped start it all, wherever you are, Mr. Hakan Hagbloom, who prompted me 25 years ago to start a business to distribute his label Westcoast Records in Italy.
Major thanks also to everyone who has stepped up to help, support, or partner with us during the years… from Mark Ashton of Now & Then Records to our good partners at The Orchard: Brad, Colleen, and Manlio, and not forgetting all that the great Scott Cohen did for us in the past. And then Jochen Richert of Soulfood Music, Derek Shulman and all the distribution companies, label managers, and PR partners that work so hard every day on the label’s products. A big shout goes especially to Xavier, Ben B., Ben F., Enrico, Sjuul, Michal, Montse, Suzan, Marco, Charles, Gary, Jon, Dustin, and all the other good guys who support and bear with us every day.
I wish to mention and thank John Baruck as well. This label all started from my love for JOURNEY and having had the honor to release the last few Journey albums makes me feel blessed and I am beyond grateful to John, a man of his word. Also I wish to mention Mr. Martin Darvill, with whom we managed to bring back the joy and the magic of the classic ASIA sound and to bring to the world the unbelievable talent that is Inglorious. More great partners are to be found in people like Tim Heyne, Robby Hoffman,
Daniel Jäger

, Mike Kobayashi, and Nik Krofta, among others.

Of course a special thanks goes to
TEN/Gary Hughes

who were the first release from the label and are currently hard at work on not one, but TWO new records to be released sometime in 2022. They have the FR CD 001 catalogue number and after all these years we still work together! What a ride!

And before finishing, hugs and thanks to the one and only
Kip Winger

, George Lynch and of course

for bearing with us for 20 years this year!

So, after 25 years of serious, hard and passionate work, I can safely say we managed to create a recognizable and fan-friendly brand for all rock fans. We have been WITH everyone of you in the past decades and we look forward to another 25 and more years of great rock to be enjoyed together! Let’s ROCK together! You make this all possible!