Germán Silva The Artist. The Singer.
“I will always sing from my heart and my soul, with passion and determination.
I will give my everything. – Germán Silva.
“My singing and music originates from years of musical influence that includes
both cultural surroundings and a deep passion for powerful on-stage
performances” says Germán. His voice and style have often been described as
funky-urban, mixed with the finesse of classical opera/pop plus his own Latin
influence.

Growing up in vibrant Latin America (Chile), Germán remembers music as a
simple part of life. Radios sat by neighbours’ windows, echoing rhythms of all
kinds. Playing soccer to the beats and rhythms of people on the street was a
common pastime for Germán and friends. The inspiration to share music and
communicate through songs and sounds is something he cherishes today.
A highly talented singer and a gifted performer, Germán (also known as “G”)
sings, writes, produces and records his own music. He performs in English,
Spanish and Italian. Germán’s professionalism, determination and charisma have
earned him respect and recognition from fellow musicians and the music
industry at large.

In his early years as a performer Germán formed the Latin dance grooves band
Vatos Locos. The band became well regarded within Melbourne’s Spanish
speaking community, allowing the band to succeed in the mainstream club
arena, and to produce an album. Vatos Locos is still Melbourne’s most
successful Latin band and highly sought after by corporate functions and
venues.

Other career highlights include performing with Ricky Martin on ‘Rove Live’ and
for Rachel Griffith’s 30th birthday. Television performances include Good
Morning Australia with Bert Newton – “one of the best acts we’ve had on our
show” – Bert Newton. (see www.myspace.com/germansilvamusic)
World Youth Day Sydney, 2008 was truly a once in a lifetime opportunity.
Germán recorded and performed live ‘RECEIVE THE POWER’ – the international
anthem of this event, in front of His Holiness Pope Benedict XVI, an estimated
live audience of 500,000 and half a billion worldwide on TV broadcast. This
extraordinary experience is something Germán will carry with him forever.
“G” is currently writing and producing his solo album which, despite his busy
schedule, is due to be released by early 2012.
“I always have a vigorous desire to give life to what I sense. I want people to
listen – to be attracted to music and get in touch with their inner feelings
through the sound and colour of my voice” Germán Silva. 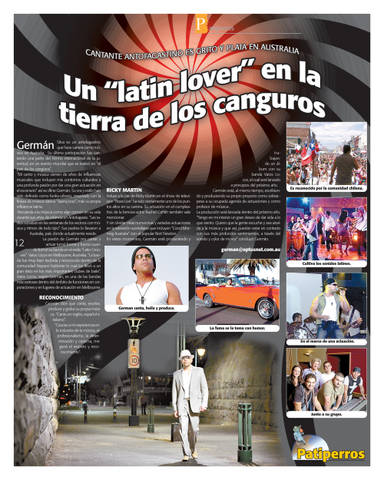 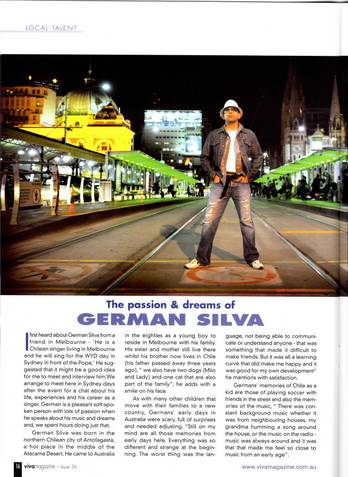 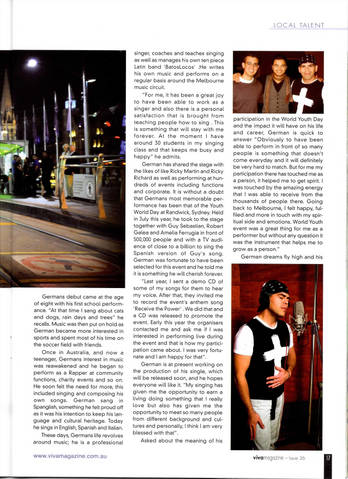 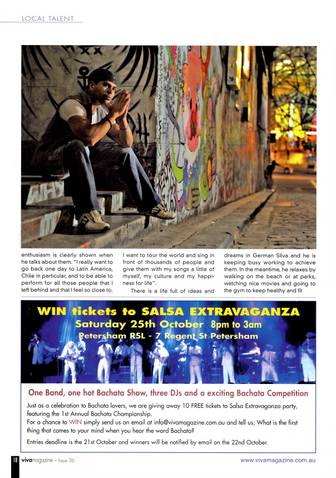