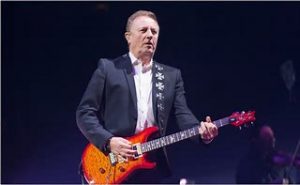 Miles was born John Errington in Jarrow, County Durham,[3] but grew up in the neighbouring town of Hebburn. While still a pupil at Jarrow Grammar School, Miles was a member of a local band called The Influence, which also included Paul Thompson, later drummer with Roxy Music;[4] and Vic Malcolm, later lead guitarist with Geordie.[3] This outfit released the single “I Want to Live” (Orange Records, 1969[5]). Following this he formed The John Miles Set before starting his solo career in 1971.[3]

Most of his songs were co-written with the bassist in his backing group, Bob Marshall.

At the peak of his success, in 1976 and 1977, Miles made several appearances on the weekly pop TV show Supersonic. The debut album did receive some attention in the US. Two singles from the debut album reached the US Billboard Hot 100 chart, “Highfly” peaked at No. 68, followed by “Music” which stalled at No. 88. “Slow Down” was his biggest US chart hit, peaking at No. 2 on the disco chart,[10] and at No. 34 on the Billboard Hot 100 in June 1977. It was later featured in the 1979 film Players, starring Ali MacGraw and Dean Paul Martin. The relative success in the US charts lead to Miles supporting Elton John on his tour.[9]

From 1985, Miles participated almost every year in the Night of the Proms,[9] a series of concerts held yearly in Belgium, the Netherlands, Germany, Luxembourg, Poland, Denmark and the United States. Regularly there were also shows in Spain, France, Austria, Switzerland and Sweden. The concerts consist of a combination of pop music and popular classical music (often combined) and various well-known musicians and groups usually participate. Miles always performs “Music”, and also sings other songs. In 2009, an album The Best of John Miles at the Night of the Proms was released, which included “Music” and cover versions including “All by Myself“, “Bohemian Rhapsody” and “It Was a Very Good Year“.

Miles also toured with Tina Turner since 1987, playing keyboards, guitar and supporting vocals on every one of her tours, and played on several of her albums.[9] He also appeared on Jimmy Page‘s 1988 album Outrider and subsequent tour (his wide-ranging vocals allowed him to cover both Robert Plant and Paul Rodgers from Page’s two previous bands), and played Hammond organ on Joe Cocker‘s album Night Calls (1992). In 1990, Miles participated in the UK heat of A Song for Europe with the song “Where I Belong”, which came second.[9]

His first DVD, John Miles – Live in Concert was released in 2002. In 2007, Miles performed in Gelsenkirchen, Germany with German band Pur and sang two songs. One of those songs, “Abenteuerland”, Miles sang with Pur in German. The concert is available on the DVD, Pur-Friends-Live-Schalke-2007. In October 2008, Miles began touring once again with Tina Turner until May 2009.

In 2017, Miles was awarded an outstanding contribution to music award at the Progressive Rock awards.[9]

Miles’ son, John Miles Jr., is also a musician. Born in London, he played with bands including Milk Inc., Sylver, The Urge, and Fixate.