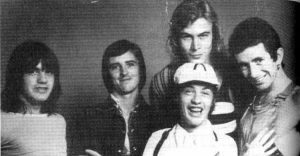 Paul Matters (died 14 October 2020) was a bassist with the Australian rock band AC/DC in 1975, joining the group after the recording of their debut album High Voltage. He was sacked by AC/DC singer Bon Scott several weeks after joining the group and replaced by Mark Evans.[2]

Matters was recruited as AC/DC bass player from Newcastle band Armageddon after parting ways with the group in 1974 over what drummer Les Gully described to AC/DC biographer Jesse Fink as “musical differences”. He was then fired from AC/DC, according to Gully, “because he didn’t fit the values of the Young [Brothers] oligarchy. Too pretty, for a start. He didn’t really fit, had strong opinions and sensitivity, and played just what he liked.”[3]

A recluse, Matters only gave one press interview following his sacking by AC/DC in 1975, to Fink for the book Bon: The Last Highway, in which he claimed that he was “a bit lazy” and “a bit cranky” but did not have enough money to eat: “I didn’t have any food in my stomach. They [management] didn’t give us any money to buy food or anything.”

In Bon: The Last Highway Fink calls Matters “an uncommonly handsome sight in AC/DC, a kind of hard-rock Chris Hemsworth who could play”. Matters performed live with AC/DC on a national tour in Melbourne, Adelaide, and Sydney promoting their debut album but did not record in the studio, where bass duties were performed by George Young.

Matters quit music after his departure from AC/DC in 1975 and sold his bass guitar. He lived on a disability pension for the rest of his life.