i don’t see anything up on their Facebook or website but I’m playing an acoustic show tonight- BLUE ROSE SALOON
Via Carolina Romani 1/11 Bresso
Milan, Italy ..hope you join me

I’ll be out for a lot of these shows by my damn self but their will be a handful of special concerts with my friends ‘ Marcus Granberg – Sweden, Matt Kamelman- Spain and David Cotterill – Hungry, Czech Republic ,Germany. 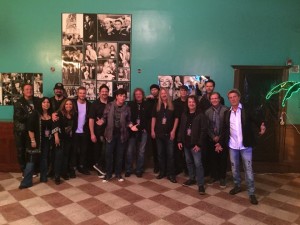 Jan 7th, a special night for our friend Tom Size

“One Size Fits All” Show at the Historic Empress Theatre in Vallejo, California

The show, dubbed “One Size Fits All,” is a musical celebration of the life and music of Bay Area recording engineer Tom Size, who succumbed to melanoma on October 30, 2016. Both bands had a long-standing professional and personal relationship with Tom. The concert will also feature an all-star jam, including Ross Valory of Journey.

Tom Size’s professional career began in the early 1970’s at the Music Annex in Palo and Fantasy Studios in Berkeley before going independent.
He oversaw the engineering for superstar artists such as David Lee Roth, Joe Satriani, the Steve Miller Band, Journey, Mr. Big, Y&T and Enchant. Tom also handled touring sound duties for bands such as Aerosmith, Mr. Big and Y&T to name just a few. Even after becoming ill in 2016, he continued working and was even planning on mixing the sound for One Size Fits All until his illness worsened.

HEY MY BROTHERS AND SISTERS NOT MANY TIX LEFT , HERES A MESSAGE FROM OUR FRIEND DAVE MENIKETTI ( Y&T)