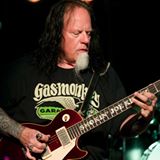 Born in Grove City, Pennsylvania, Kubek grew up in the Dallas, Texas area.[2] In the 1970s during his teen years, he played with the likes of Freddie King and in the 1980s began performing with Louisiana-bornsinger, Bnois King.[3]

In 1985, Kubek released his first record on Bird Records, a 45 RPM single with the tracks “Driving Sideways” (written by Freddie King and Sonny Thompson) and “Other Side Of Love” (written by Doyle Bramhall, Sr.). The single was executively produced by Clint Birdwell and co-produced by Charley Wirz and Kubek. The two tracks reappeared on Kubek’s 2012 album, Let That Right Hand Go, produced by Clint Birdwell and issued on Birdwell’s label, Bird Records Texas. The album is a collection of mostly unreleased material recorded since the 1980s (with the 1985 single’s track, “Other Side Of Love”, entitled “The Other Side Of Love”).

In 1991, Kubek released his first full-length album entitled Steppin’ Out Texas Style (Bullseye Blues Records) and has since released over a dozen albums on various labels.[3]